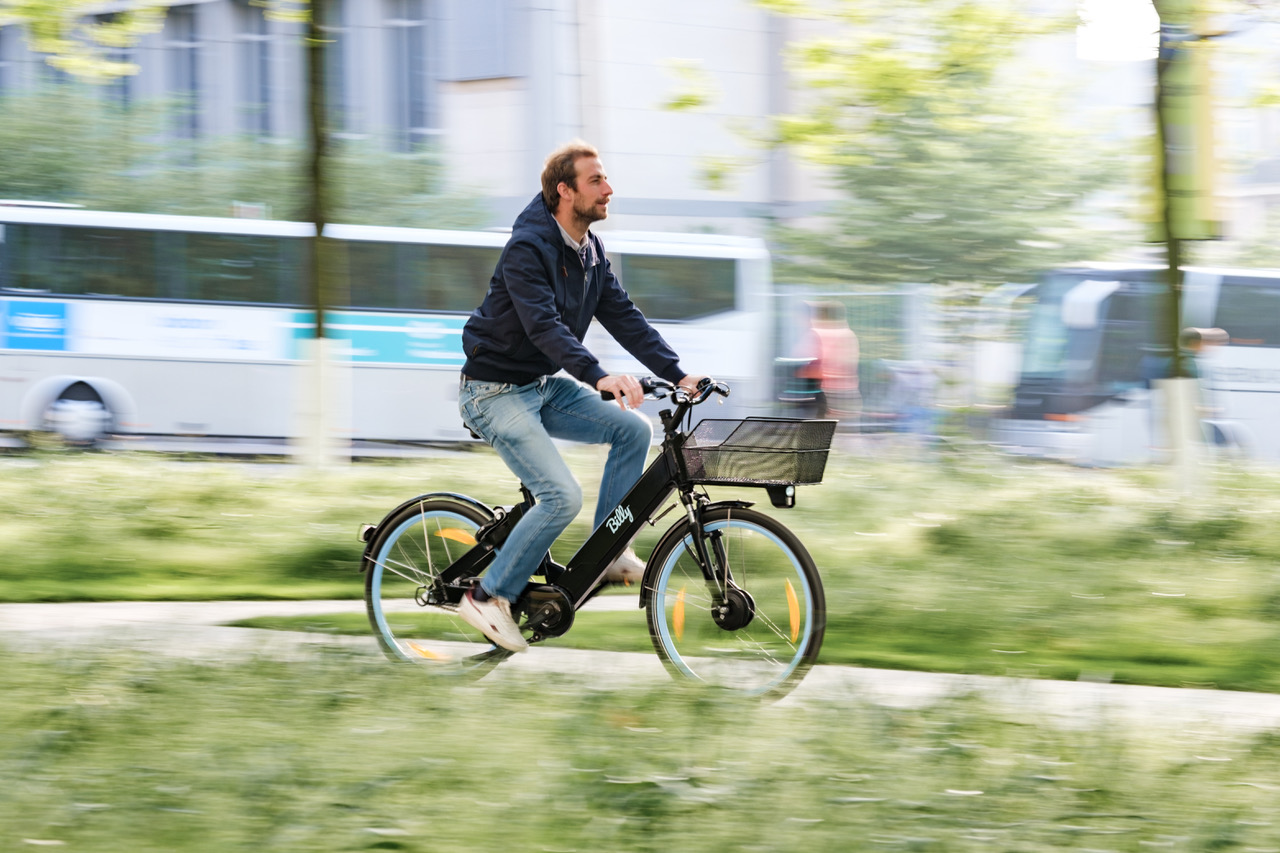 Km of gasoline-free travel saved thanks to Billy

Marketer and entrepreneur Pierre de Schaetzen wanted to make getting around Brussels both less expensive and more convenient than using a car.

Scaled from 150 e-bikes with test riders to 600 e-bikes with thousands of real users in less than a year. Tripled revenue from 2019 to 2020 while keeping costs the same.

“When shared e-mopeds first arrived here in Brussels, they had a huge impact on my lifestyle. Not just economically, but also in terms of flexibility. I got rid of my car.”

The fact that Pierre sold his car is a big deal. In Brussels and Belgium more widely, cars are traditionally viewed as ‘cherished possessions.’ People tend to use their cars every day and for any journey—half of all car journeys made in Brussels are shorter than 5km.

Originally a marketer, Pierre had no previous experience working in the mobility industry. But after seeing firsthand how shared mobility transformed his day-to-day life, it didn’t take him long to spot a business opportunity.

“A lot of urban planning and space issues are caused by the overuse of cars. To really transform a city, there needs to be another way for citizens to travel short distances.”

While he enjoyed using them, Pierre realized that e-mopeds weren’t the ideal vehicle for Brussels. The city needed something that could be used by anyone, whether or not they had a driving licence.

Brussels’ steep hills discourage people from using traditional bikes—but the electronic motors in e-bikes solved this problem. So Pierre bought one and lent it to different people for 24 hours to get their feedback. They kept saying the same thing: ‘Can I keep it?’

With e-bikes, Pierre was confident he’d found product-market fit. Now came the real challenge: connecting them together as a fleet, and making this work as a business.

From sharing to scaling: how ElectricFeel helped make Billy Bike a reality

While shared e-bike fleets with fixed parking stations already existed in some cities, Pierre felt that his fleet needed to offer maximum flexibility to steer people away from their cars. This meant free-floating parking, so riders could park anywhere in the city.

When Pierre and his co-founders created Billy, a free-floating e-bike fleet had never been done before. To make this happen, they’d need some help. Billy launched a test fleet and app with support from another shared mobility software provider, but after growing to 150 bikes they needed to switch to a provider with the technology and experience to handle larger fleets.

Since ElectricFeel has a proven track record powering shared fleets of thousands of vehicles with their platform, they got in touch. Pierre quickly realized that their shared vision made Billy and ElectricFeel a perfect fit:

“Having the best tech team is very important. But ElectricFeel also has a clear vision: transform mobility. This means they’ve already thought of questions that we will ask in one year, or three years.”

Within weeks of becoming partners, ElectricFeel’s design team had upgraded Billy’s previous test app into a professional, custom-branded rider app with seamless user experience. Pierre’s micromobility business quickly went from a prototype with some test users to a fully launched service with 600 e-bikes and thousands of paying users.

That was back in 2019. Since then, Billy has weathered the storm of Covid-19 very effectively and is looking to scale its fleet with another 1000 e-bikes in 2021. But scaling is only half of the story—according to Pierre, the real value of ElectricFeel is operational efficiency.

3x the revenue, no extra costs

Between 2019 and 2020, Billy managed to triple its revenue while keeping the fleet’s running costs exactly the same. For Pierre, this is one of their greatest achievements so far.

“The real challenge of this industry is keeping your costs down while you scale. That’s how companies like us can start making money. ElectricFeel has allowed us to gain efficiency while scaling.”

By providing in-depth task and data management features as part of its platform, ElectricFeel has made it possible for Billy to scale their operational team while keeping an eye on all the key metrics that matter.

“We know exactly how many batteries each team member is swapping, the status of every bike, which tasks are currently assigned, which are completed,” Pierre explains. “Once your team grows to 30 people, these things are super important.”

Even more important is that all of this information is automatically collected and organized into ElectricFeel’s data warehouse. The Billy team can then analzye this data and track everything they do. For Pierre, this is what makes ElectricFeel fundamental to Billy’s success:

“Every decision we make and employee KPI we define is based on data gathered with ElectricFeel. Our whole company is built around ElectricFeel’s data management.”

The path ahead for Billy is exciting. The team has built a formidable community around their brand, which has allowed them to see off local challenges from big name competitors like Uber. With Pierre’s marketing experience and ElectricFeel’s software, both companies can continue to cooperate towards achieving their mutual goal: reclaim city centres from cars.

Km of gasoline-free travel saved thanks to Billy